This timeline lists important events and details in Greta Garbo's life. More detailed information can be found in a number of excellent biographies that have been written on her life. A list of these books can be found in the Bibliography.

June 1, 1920 -  Karl Gustafson dies at the age of 48 of nephritis. Two weeks later, Greta is confirmed in the Swedish State Church.

Modeling hats for PUB's catalog
June - July 1920 -  Greta's first job as a lather girl begins at a local barbershop on Horn Street in Soder. On July 26, with the help of her sister Alva, she gets a job in the millinery department at PUB, a large department store.

Fall 1920 -  Greta is selected to model hats for PUB's spring catalog and appear in a promotional film for the department store called "How Not To Dress" (or "Mr. and Mrs. Stockholm Go Shopping").

In "Our Daily Bread"
Summer 1921 -  Greta appears in another promotional film ("Our Daily Bread"), this time promoting bakery products for the Consumer's Cooperative of Stockholm.

July 1922 - Greta meets comedy producer/director Erik Petschler and he offers her a part in his upcoming film "Luffar-Petter" (or "Peter The Tramp"). She leaves her job at PUB to concentrate on a career in acting.

September 1922 -  Greta is accepted as a student in the Royal Dramatic Theater Academy.

December 26, 1922 -  "Luffar-Petter" premieres in Stockholm but the film, nor Greta, is given much attention.

with friend Mona Martenson
Spring 1923 -  Greta and another classmate, Mona Martenson, are selected by the school to audition for noted Swedish film director Mauritz Stiller. Both girls get parts in his upcoming film, "The Saga of Gosta Berling".

March 1924 -  The four hour "The Saga of Gosta Berling" premieres in Stockholm with much fanfare and noted attention to Mauritz Stiller's new discovery, Greta Garbo.

November 1924 - On a visit to Stockholm to see a screening of The Saga of Gosta Berling, Louis B. Mayer meets Stiller and Garbo. A contract is signed that requires Stiller and Garbo to come to Hollywood no later than May of 1925. Neither Garbo or Stiller are too excited about the prospect. 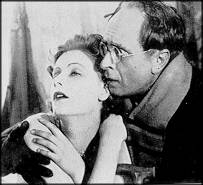 with Jaro Furth in "The Joyless Street"
March 1925 - After Mauritz Stiller's next project (to be shot in Turkey) falls through and his film company goes bankrupt, the German filmmaker G. W. Pabst agrees to buy Greta Garbo's services for his next film The Joyless Street.

May 18, 1925 - The Joyless Street premieres in Berlin and Paris. It is an instant success. 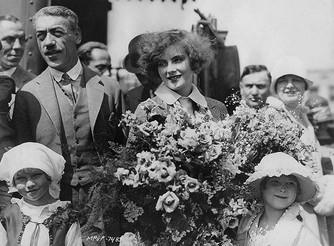 September 10, 1925 - After spending the summer in New York waiting for MGM to send them west, they finally cross the U.S. by train to arrive in Hollywood.

February 21, 1926 - The Torrent is released and is a smashing success. MGM realizes that although Garbo may look ordinary in real life, she transforms herself when on screen. 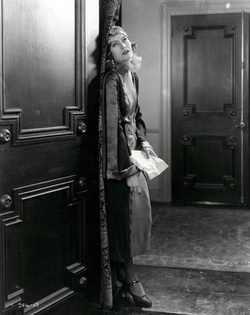 Garbo in "The Torrent"
March 1926 - Mauritz Stiller is assigned as director for Garbo's next film The Temptress but he is dismissed in April because of his lack of experience in Hollywood filmmaking.  He is replaced by Fred Niblo.

August 1926 - Filming is completed on The Temptress but Garbo is unhappy to hear that her next project is playing yet another vamp.  She reports to work on August 17 for Flesh And The Devil.

September 1926 - Gilbert and Garbo begin a romantic relationship and she spends most of her time at his Tower Road house. 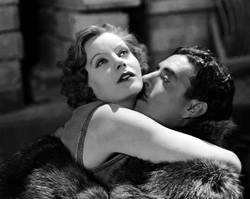 with John Gilbert in "Flesh and the Devil"
October 1926 - Following the completion of Flesh And The Devil, Garbo goes on strike to protest the poor scripts being offered to her and her $750 a week salary.

January 9, 1927 - Flesh And The Devil opens to record breaking business. 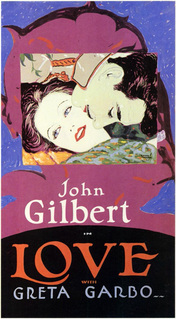 The movie poster for "Love"
May 1927 - Garbo begins filming Love, an adaptation of Tolstoy's Anna Karenina. Her co-star - John Gilbert.

November 8, 1928 - Mauritz Stiller dies in Sweden after several months of ill health. Garbo receives the news on the set of Wild Orchids where she almost collapses. 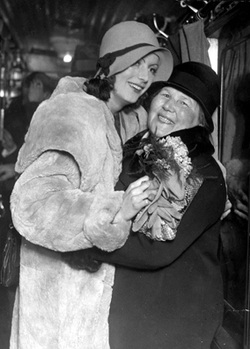 January 19, 1929 - Garbo's latest film, A Woman Of Affairs, is released to wide acclaim.  It is her first film in which she portrays a modern woman and audiences love it!

April 1929 - John Gilbert proposes for the third and last time to Greta.  She again refuses. In May, Gilbert marries actress Ina Claire.  There is no comment from Garbo.

October 1929 - It is announced that Anna Christie will be the first sound film for Garbo. 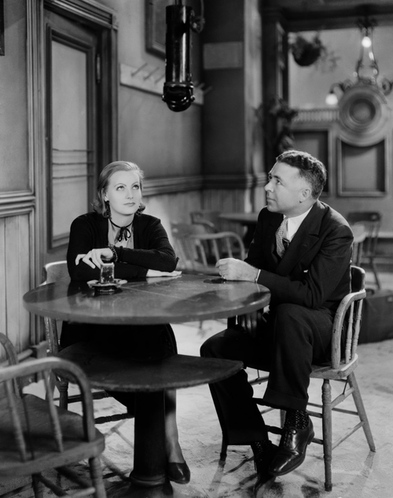 October 1930 - The Academy Award nominations are announced and Garbo is nominated for both Anna Christie and Romance. The winner, however, will be Norma Shearer for The Divorcee. 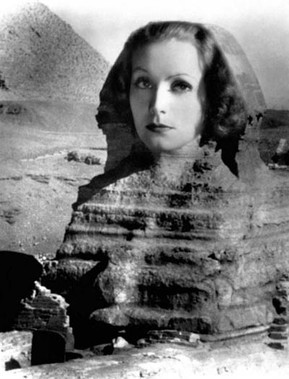 "The Swedish Sphinx"
March 1931 - Clarence Sinclair Bull creates his famous photo montage of Garbo and the Sphinx.  It is seen around the world and enhances her mystique even more.

May 1931 - Garbo starts work on her next film Susan Lenox which casts her opposite hot new actor Clark Gable.

July 1931 - Garbo and de Acosta go on a six week vacation together to the Sierra Nevada Mountains. In her autobiography, De Acosta claims that they had an intimate relationship but her claims are never really proved. Years later, a photo of Garbo hiking topless on that trip will surface.

December 31, 1931 - Mata Hari is released and becomes one of Garbo's most successful films. 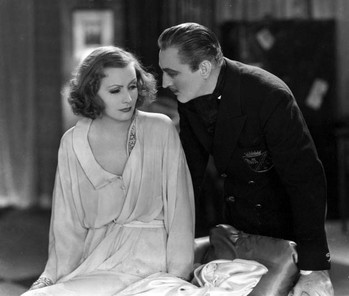 with John Barrymore in "Grand Hotel"
January 1932 - Filming begins on the all star Grand Hotel.

April 12, 1932 - Grand Hotel premieres and is a smashing success.  It will go on to win the Oscar for Best Film. Greta Garbo is now billed simply as "Garbo".  She utters the famous line "I want to be alone" in the film. 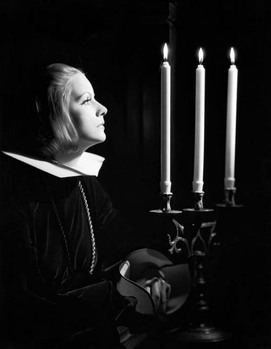 As "Queen Christina"
March 1933  - Garbo returns to Hollywood and begins work on Queen Christina.  Bad chemistry between her and her leading man, Laurence Olivier, propel the studio to find a replacement. Much to Louis B. Mayer's objections but with Garbo's pull, John Gilbert is signed.

October 1933 - Filming on Queen Christina ends. Garbo and her director Rouben Mamoulian are romantically linked.  They take a trip to Arizona together in January.

December 26, 1933  - Queen Christina,  one of the most beautiful films Garbo ever made, is released.  It does better business overseas than in the United States.

July 1934 - After months of delays and censorship problems, Garbo begins work on The Painted Veil.

Summer 1934 - During the filming, Garbo reportedly has a brief affair with her co-star George Brent.

December 7, 1934 - The Painted Veil opens to poor reviews.  The most exciting element of the film seems to be Garbo's wardrobe.

May 1935 - Garbo completes her latest film, Anna Karenina, signs a new contract for two films at $500,000 each and takes another trip to Sweden. 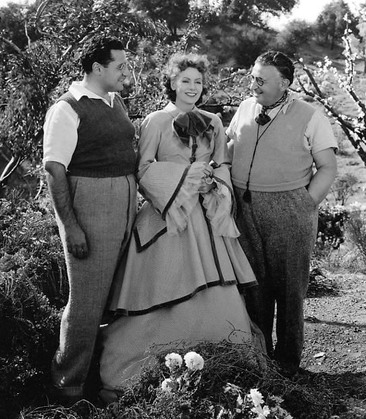 Director George Cukor, Greta Garbo and cinematographer Karl Freund on the set of "Camille"
August 30, 1935 -  Anna Karenina is released. Garbo will win the New York Films Critics Award for her performance but does not receive an Academy Award nomination.

January 9, 1936 - John Gilbert dies at the age of 40 of a heart attack. Garbo is told the news in Sweden. She makes no public comments about  his death.

May 1936 -  Garbo returns to the U.S. from a seven month visit to Sweden. Production soon begins on her latest film, Camille.

January 22, 1937 -After a lengthy production with numerous retakes, Camille is released. Despite being ill during most of the shoot, Garbo's beauty is breathtaking in the film.  She wins another New York Film Critics Award and is nominated for the Academy Award. She loses this time to Luise Rainer.


March 1937 - Filming begins on Conquest, the most expensive film of Garbo's career.

October 1937 - Garbo and composer Leopold Stokowski are romantically linked in the press.

November 4, 1937 - Conquest is released but fails to recoup its expenses.

February 1938 - Garbo and Stokowski vacation together in Italy.  After being besieged by the press, they hold a press conference in which Garbo denies marriage rumors and asked that they be left alone. They spend the next five months touring Europe. 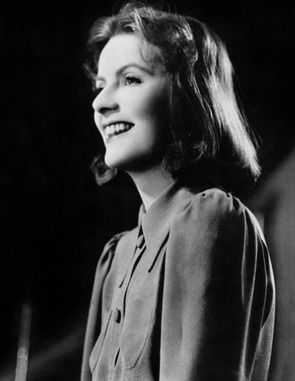 As "Ninotchka"
May 3, 1938 - An infamous advertisement in the Hollywood Reporter labels several big name stars, like Garbo and Marlene Dietrich "box office poison" claiming that their tremendous salaries do not reflect their ticket sales.

June 1939  - Garbo meets nutritionist Gayelord Hauser, who will become a major influence in her life. She begins work on Ninotchka.

October 1939 - As a result of World War II, MGM arranges to have Garbo's family sent to the United States.

November 9, 1939  - Ninotchka is released and is a triumphant success. Garbo will garner her final Academy Award nomination for the film. She will lose to Vivien Leigh for Gone With The Wind.

July 1940  - Garbo meets another man who will play a major role in her life - George Schlee, the husband of fashion designer Valentina.

June 1941 -  Garbo begins work on her final film, Two Faced Woman.  From day one, the production is plagued with censorship problems.

December 31, 1941  - Two Faced Woman is released. It receives the worst reviews of Garbo's career, is condemned by the Catholic Church (who later reduce their judgments after some changes are made) and does poorly at the box office. 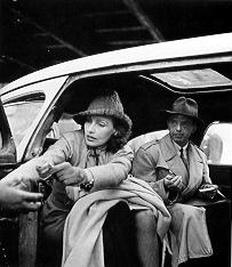 December 1942 - Garbo signs a new contract with MGM, under the same terms as the previous one, but it is canceled a month later because a project cannot be agreed upon.

Fall 1943 - There is talk of Garbo playing Joan of Arc in an English production, but plans fall through. 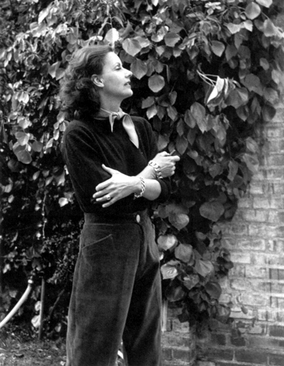 August 1947 -A planned film about the life of George Sand falls through, and Garbo embarks on a European trip, again with George Schlee.

May 1949 - Garbo returns to the studio to make a screen test for La Duchess de Langeais.

September 1949 - The financial arrangements for La Duchess de Langeais unravel and the project is put on hold. 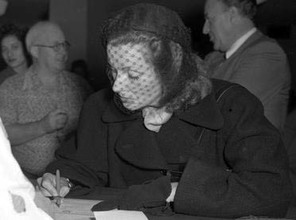 1952 - Garbo nixes a last serious effort at films when she turns down My Cousin Rachel.

October 1953 - Garbo purchases a seven room apartment in New York that she will live in the rest of her life.

March 30, 1954 - Garbo receives an honorary Academy Award for her "unforgettable screen performances".  She does not attend the ceremonies.

March 1960 - Mercedes de Acosta publishes her autobiography Here Lies The Heart.  In it, she depicts her relationship with Garbo and includes a topless picture of Garbo on their Sierra Nevada trip.  Garbo never speaks to her again.  De Acosta dies in 1968. Garbo's letters to Acosta were made public in 2000 but none were explicitly romantic. However, Garbo's family did not release all of the letters. 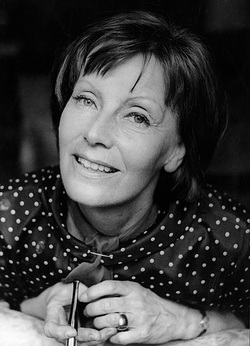 October 1964 -George Schlee dies of a heart attack in Paris. Garbo is with him but avoids the press and the police.  She is criticized in the press and by Schlee's widow Valentina for her actions.

November 1971 -Garbo again terminates a friendship when Cecil Beaton publishes his memoirs in which he writes about their affair together.  Garbo does however, visit Beaton years later when he is dying. 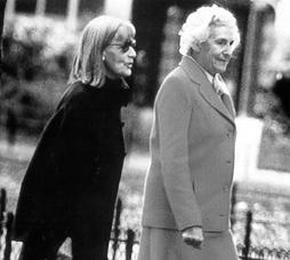 Walking the streets of New York with friend Cecile de Rothschild
1972 -  Garbo travels less but makes daily walks throughout New York City.  She mainly shops at flea markets.  She is recognized but few dare approach her.

1980 - A Swedish stamp honors Garbo and she is also bestowed the Commander of the Royal Order of the North Star, First Class for Swedish recognition to her country.

1984 - Garbo has surgery for a rare type of breast cancer.

January 5, 1989 - Garbo is hospitalized in New York for kidney failure.

September 14, 1989 - Garbo's greatest enemy, Valentina Schlee dies.  Amazingly, the two women lived in the same apartment building for over 30 years but never spoke to one another after the death of George Schlee.